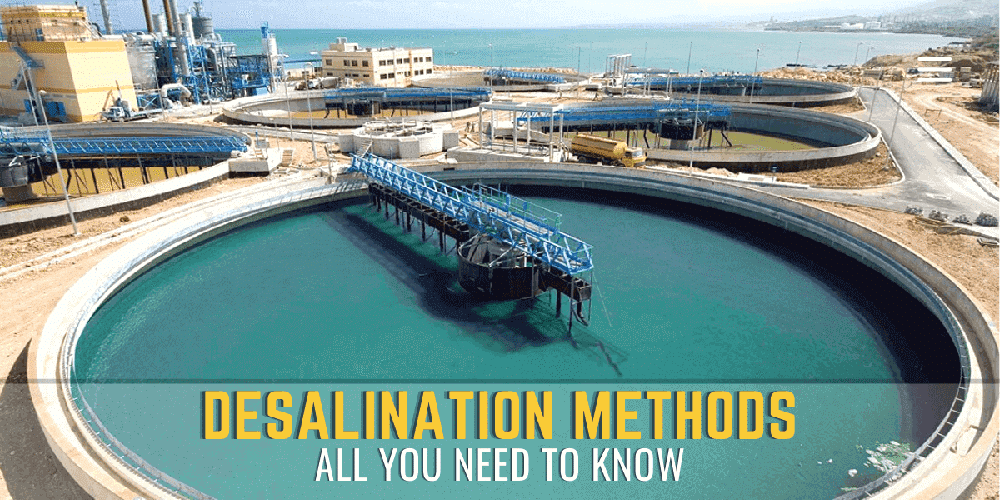 Freshwater is a basic need, and so wastewater treatment and desalination of saline water are important to make more potable water accessible to the needed populations. This process removes excess salt and also decreases the amount of minerals from the water. Let’s see in detail, what a desalination process is and what are the different desalination methods.

What is the Desalination Process?

This process makes water fit for human consumption, irrigation, industrial applications, and more. The processes for industrial desalination are sometimes expensive, making them useful only where it is not economically viable to get fresh water in any other way.

Why is Desalination Important?

With the human population growing each day, there is an increased need for freshwater. Arid areas with no access to freshwater rely on rain and underground water resources, which again, are limited.

The water from underground sources becomes increasingly brackish as extraction continues, making desalination even more crucial as people seek freshwater. An estimated 30% of the world’s areas under irrigation suffer from salinity, and the solution of remediation is costly to use. For this reason, desalination can solve a number of problems and produce water that will help support different populations.

Types of Water Used for Desalination

Types of water used for desalination are mainly seawater and brackish water.

The water to be desalinated can be taken from the surface of the sea, or beneath it. It is viable to source salty surface water when there is a need to minimize the impact on the surrounding area. If filters can be used to minimize the amount of pre-treatment necessary before the water makes it to the primary treatment systems, this method is effective.

Subsurface intake causes less damage to marine life but harms nearby freshwater aquifers if the geology is not favourable. Methods of intake from below the surface include infiltration galleries, vertical beach wells, and radial wells.

Brackish water is considerably less salty than seawater and is commonly found in aquifers, which are underground stores of water, or estuaries which are lower courses where the river meets the sea.

There are three main methods of desalination and water treatment, and they include:

Thermal distillation is one of the best ways of treating seawater and brackish water to convert them into potable water. The most common thermal desalination processes are:

With multi-stage flash distillation, saline water is sent through multiple chambers where it is heated and compressed at high temperatures and high pressure. As the water moves through the chambers, the pressure is reduced. As a result, saline water boils and forms freshwater vapor, which condenses and collects.

Multi-effect distillation uses the same process as multi-stage flash distillation. The main difference is that instead of using multiple chambers of a single vessel, this process uses successive vessels. The multiple vessels make this process more efficient.

Vapor compression distillation uses the heat of vapor compression to evaporate the feedwater. It can either be used independently or combined with another process for thermal distillation. These units are commonly used for small- to medium-scale purposes such as resorts, industries, and petroleum drilling sites.

This is another method used to desalinate large volumes of water, and it uses membranes that only allow the passage of either negatively charged or positively charged ions at a time.  Four common ionic molecules in saline water are calcium, sodium, chloride, and carbonate.

The driving force behind it is an electrical potential that attracts and moves cations and anions through a permeable membrane, producing fresh water on the other side.

Reverse osmosis is a water treatment that uses a pressure gradient to move the high-pressure saltwater feed through a membrane that filters out chlorine, salt, and dirt.

What is the Technique used by Sodimate for Desalination?

Reverse osmosis is the primary method used in Sodimate’s plants to desalinate water, effectively producing fresh water for use by local people. We supply equipment for the injection of powder in seawater desalination systems. We also do polymer-based treatment for the treatment of sludge in centrifuges.

For this type of treatment, we can feed lime which allows remineralizing the seawater, the dosing of limestone, fluoride, and metal bisulfite.

In the Middle East, the reverse osmosis plants used by Sodimate for wastewater treatment are growing in popularity. This is because modern technological advances allow for better energy efficiency as well as equipment that lasts longer without the need for replacement. For plants at Metito Duba and SWRO-4 Al Jubail, we have provided 2 big bag unloaders type K, 2 dosing systems ZFP500, 2 tanks of 1 m3, 1 set of pumps +1 centrifugal pump.

With the demand for fresh and potable water increasing even further in the future, using the best technology ensures that more people have their water needs met, leaving a smaller carbon footprint on the environment.